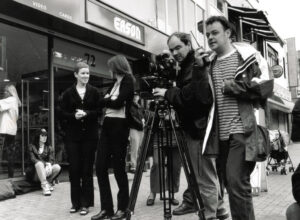 ”Vincent’s commitment to nurturing future talent is clear. He gave me the confidence to become a self-shooting director as well as an appetite to progress as far as I can in my career.”

“Perhaps the single most insightful, hands-on short course I’ve ever completed. This course alleviated any anxieties I felt around directing.  Vincent guided me in finding my own style and my own director’s voice, something that has continued to stand by me particularly when engaging with crew and leading a team of people of different skill sets and objectives towards a common goal.”

”I learned how to make a film, creatively, technically in such a short space of time.  A brilliant experience.”

”Students have benefited greatly from Vincent’s experience and creativity along with the guidance and support he provides in his practice workshops at Ulster University.”